Our experience ranges from broadcast current affairs to challenging feature-length documentaries for cinema and TV, and from tightly-budgeted educational and charity films to corporate productions for large multinationals.

We blend journalistic rigour with a genuine feel and sensitivity for the subject at hand. Having worked in almost 40 countries across the globe, our common sense approach is underpinned by real practical and logistical expertise.

By working with a trusted network of diverse freelancers we are able to scale crew size and adapt expertise for every project we deliver.

We work on projects either as principal producer or in collaboration with other individuals and production companies. We are always on the lookout for new partnerships. 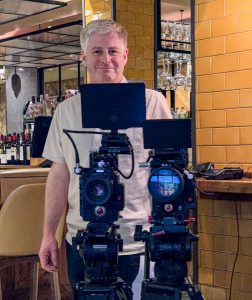 The company was started in 2011 by Justin Temple and is based in Oxford. With a 20-year background in the factual film-making industry, Justin has worked as a producer, director, journalist, camera operator, UAV pilot, editor and researcher.

After graduating from Cambridge University in 1995, Justin spent two years as a freelance print journalist, contributing to a number of local and national newspapers and agencies. His first job in film was as a researcher on the 1997 Rory Peck Award-winning Dispatches documentary, Death on the Silk Road.

In 1998 he set up Newswatch Media Group Ltd, a multi-media news agency providing text, video and audio content for web sites, television broadcasters and other outlets. He returned to freelance documentary film production in 2002 and worked on three series of Channel 4’s flagship foreign affairs strand, Unreported World, as well as independent features for Channel 4 News and documentaries for both Channel 5 and BBC2. Since setting up Seymour Productions, his work has focused more on feature-length documentaries for cinema.

Justin has a passion for justice and human rights and this has been a theme of many of the multi award-winning documentaries he has contributed to.

He has filmed, produced and directed a wide range of corporate film and photography projects, encompassing everything from skin care product photos to films about chocolate-making, safe driving tips and reforestation programmes in East Africa.

Justin is a member of the National Union of Journalists.

We have worked in the following countries to date:

Some of the brands we have worked with: