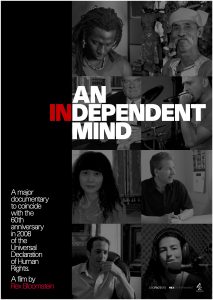 Produced with Rex Entertainment, BAFTA award-winning director Rex Bloomstein’s feature length documentary about freedom of expression was shown at over 30 film festival and theatrical screenings in 10 different countries, winning the Human Rights Award at the Biografilm festival in Bologna. It was broadcast on More4 in the UK as well as being widely distributed internationally.

“Everyone has the right to freedom of opinion and expression; this right includes freedom to hold opinions without interference and to seek, receive and impart information and ideas through any media and regardless of frontiers.”
Article 19, Universal Declaration of Human Rights

How do you deal with the threat of imprisonment for drawing a cartoon of your president? How do you survive being sent to a labour camp for telling a joke? What is the impact of being tortured for writing a poem? Or of being forced into exile for singing a song?

These are some of the stories you will encounter in AN INDEPENDENT MIND, a unique feature-length documentary inspired by one of the most fundamental and controversial of human rights: Freedom of Expression.

Enshrined in Article 19 of the Universal Declaration of Human Rights, freedom of expression is one of the most fundamental rights of all. It is the very cornerstone of democracy and underpins the values of any ‘free’ society.

But with the emergence of new threats that challenge the balance between the security of the state and the freedom of the individual, it is increasingly coming under attack.

AN INDEPENDENT MIND begins with quoting Article 19 as the ideal encapsulated in the Declaration. It then presents the realities faced by a succession of characters attempting to exercise their right to freely express themselves in different parts of the world.

Through these encounters, the film explores in human terms the importance and complexities of freedom of expression and its acceptable limits.

The approach is direct. There is no commentary. Each character relates his or her own story. Each is self-contained and is not inter-cut with the others. Eight individual voices that together magnify one profound central theme.

By asking what it takes to be a cartoonist in Algeria, a comedian in Burma, a poet in Syria, a journalist in Guatemala or a protest singer in Ivory Coast, director Rex Bloomstein underlines to us how fortunate we are in the free and democratic West.

But it’s not all so comfortable.

The revelations of the sex blogger in China, the Basque rock group in Spain and the British revisionist historian will challenge your assumptions about the right to freedom of expression and focus your mind on one of the most urgent and relevant debates of modern times.

Above all, it is a film that will make you reflect – on the importance of the free dissemination of knowledge, opinion, art and, significantly, its limits.

It is guaranteed to get you talking…

Rex Bloomstein’s new documentary, An Independent Mind, follows eight very different people from around the world as they fight for their freedom of expression. The subjects range from the exiled Ivory Coast singer Tiken Jah Fakoly to the Chinese sex-blogger Mu Zimei; from Burma’s political comedians the Moustache Brothers to the British historian David Irving, who has been accused of being a Holocaust denier in the past. Others include a Basque rock group, a Syrian writer and an Algerian cartoonist, all of whom have been imprisoned or silenced due to their beliefs. Bloomstein’s film is unsettling. With no narrator to guide you or music to distract you, the stories speak for themselves, with often surprising consequences.
THE INDEPENDENT ON SUNDAY

Rex Bloomstein’s thoughtful, subtle film asks what has become of one of the defining questions of our time… Excellent.
GUARDIAN GUIDE

Article 19 of the Universal Declaration of Human Rights declares that “everyone has the right to freedom of expression” and it’s this that drives Rex Bloomstein’s sober and reflective documentary…..Bloomstein believes that that those that seek to defend freedom of expression should do so in all quarters, however unpalatable the sentiments.
THE DAILY TELEGRAPH

“As soon as you start saying this opinion is accepted and acceptable and that opinion is not acceptable, then you are degrading society.” A laudable closing statement for this meaty film…
THE TIMES – DIGITAL CHOICE

Marking the 60th anniversary of the Universal Declaration of Human Rights, Rex Bloomstein’s film raises issues of freedom of speech by letting various individuals relate their battle to express themselves.
THE OBSERVER – DIGITAL PICK OF THE DAY