This Prison Where I Live 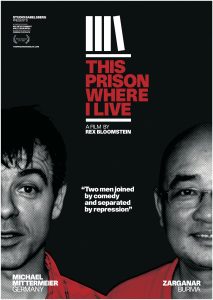 Produced with Rex Entertainment and Yo Man Media, BAFTA award-winning director Rex Bloomstein’s feature length documentary highlighted the plight of Burmese comedian and prisoner of conscience, Zarganar, who was jailed for 35 years by the military dictatorship in 2008.

The film, which was fronted by German comedian, Michael Mittermeier, was shown at over 70 film festivals and cinema screenings in 30 different countries. It was broadcast by ZDF in Germany.

Zarganar says this film helped secure his release in 2011. The following year he met with Bloomstein and Mittermeier in London. We filmed this encounter, which became the basis of a new ending for the film.

This is a film about two comedians.

Maung Thura, better known as Zarganar, is Burma’s greatest living comic. Relentlessly victimised by the Burmese military junta, he is now in prison. Michael Mittermeier, in stark contrast, is free to practise his art of humour and provocation as one of Germany’s leading stand up comedians.

Two men joined by comedy and separated by repression.

Like many of Burma’s leading dissidents, Zarganar has been silenced. He has been jailed on a series of trumped up charges for his outspoken criticism of the government after leading a private relief effort to deliver aid to victims of Cyclone Nargis, and for trying to alert the world’s media to the junta’s criminal failure to respond to a human catastrophe. He was condemned in 2008 by Burma’s generals to 59 years behind bars, later reduced to 35 years.

The genesis of this film begins in 2007, when Zarganar had agreed to be interviewed by the British documentary filmmaker, Rex Bloomstein, despite being banned from all forms of artistic activity and from talking to foreign media. Over two days our team interviewed Zarganar in depth in his flat, showed the cinemas that are prevented from screening his films, the bookstalls not allowed to sell his plays or poetry, and the makeshift TV studio where his fellow comedians rehearse on a stage that he himself is forbidden to tread. Footage which had never been seen or broadcast before.

Equally irreverent and famous for tackling taboo subjects in his comic routines, Michael Mittermeier has extended the range of comedy and satire in the German speaking world. Hearing of Zarganar’s fate and seeing the footage, Michael joined with Bloomstein to make a film about this man who has paid such a price for speaking out against the regime.

Together with a small team, they travelled secretly to Burma.

THIS PRISON WHERE I LIVE is a feature documentary and is the story of Michael’s exploration into the personality, the motivation and the talent of the man who describes himself as the ‘loudspeaker’ for his people.

Michael visits the same locations: Zarganar’s flat, the streets with their cinemas and bookstalls, the same hall and the same stage. All now empty of his presence.

Artists, actors, comedians – Zarganar’s contemporaries – were contacted to go on camera to give further insight into this remarkable and courageous man and why he takes such risks. But Michael and the team encounter a climate of fear, where people are terrified to speak out. Will Zarganar’s fellow artists choose to go on camera with all the potential consequences in a country that locks away and tortures its dissidents? How close can he get to the prison where Zarganar is held in Myitkyina, northern Burma? Will he and the team be arrested or deported?

Zarganar is a man who has not taken the path of armed struggle against a tyranny in the way that so many have in different parts of the world. An artist whose weapons are satire, films, books, poetry and comedy.

For Michael Mittermeier, the restrictions and terrors of living under a ruthless military machine resonates with him in terms of Germany’s history. Observing Zarganar heightens his understanding of what it was like to live under the Third Reich or the East German Stasi. He discusses the parallels that run between himself and Zarganar, who first hand is living the dilemmas of practising humour under a dictatorship.

A thought-provoking documentary about state repression.
THE DAILY EXPRESS

A quixotic, captivating documentary… The poet and stand-up comic Zarganar, after years of satirising the military junta and after one previous jail spell, is now serving a 59-year sentence for treason. British filmmaker Rex Bloomstein logged an interview with him just before he was sent down and uses snippets as an extended prologue. The burly baldpate cracks jokes like hard-boiled eggs, while fully aware (we sense) that he may be the next egg to be cracked by fate. The rest of the film narrates Bloomstein’s return to Burma, with German stand-up comedian and Zarganar fan Michael Mittermeier (who also produced the film) as a frontman. The field trip’s programme starts falling through when Zarganar’s friends fail to honour interview appointments. (The junta has warned them off.) Finally – yet compellingly – Bloomstein and Mittermeier are reduced to contraband camerawork, taking drive-by shots of Zarganar’s prison from car and motorbike. It’s a charming, courageous film… Fittingly it ends with the appalling postscript – a parody of optimism fit for a military state – that Zarganar’s sentence has now been ‘reduced’ to 35 years.
THE FINANCIAL TIMES

[Zarganar is] probably the bravest comedian in the world. In the film, which features rare footage of him in conversation, he comes across as the humblest, too. Prevented from earning a living or even writing his own name, he explains, with smiling certainty, that it’s all part of the job description: “We must stand in front of the people – and sacrifice for the people,” he says.
THE DAILY TELEGRAPH

This inspirational documentary melds the footage of British film-maker Rex Bloomstein, who interviewed Zarganar in 2007, with the story of a German comedian, Michael Mittermieier. They travelled together to Burma to secretly film an investigation into a humble, jovial but ferociously courageous figure… This film will make you seriously question whether you would stand up to injustice if the stakes were this high.
METRO

Very gripping… A heartfelt tribute to a heroic crusader.
TIME OUT

This Prison Where I Live is an eye-opening documentary about Zarganar, a Burmese comedian who director Rex Bloomstein met a couple of years ago in the authoritarian state. A mischievous, indomitable critic of the brutal military leadership, Zarganar was last year imprisoned for more than 50 years for making some mildly disparaging remarks about the regime to foreign press. Attempting to discover what exactly has happened to Zarganar, Bloomstein returns to Burma with Michael Mittermeier, a successful German comedian (yes, they do exist). What unravels is a damning portrait of the extent of state censorship – no one will speak to Bloomstein, fearful of the repercussions – and a fierce indictment of a society that is compelled to lock up its comedians. There’s plenty of archive footage of Zarganar, and while his humour struggles to transcend cultural barriers, his impish and jovial presence lights up the screen.
THE BIG ISSUE